Breaking down the Exeltel II 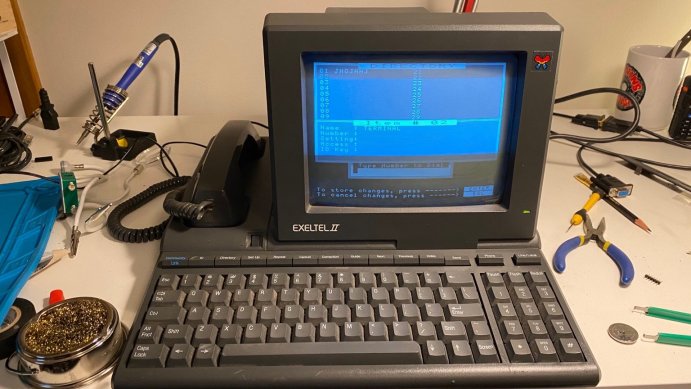 From time to time, I volunteer some time to work on the vintage hardware that comes through the door at Free Geek Twin Cities, and participate in their Discord. Usually the stuff that rolls in is your usual spider egg-infested Pentium IIIs and what-have-you, but once in a while something like a Compaq Portable or more another more unique computer will roll in. One item that came in was the Exelvision Exeltel II.

Exelvision is a French company that produced a line of 8-bit computers and terminals. Their terminals were used to connect to Minitel, an interactive videotex service that was wildly popular in France well into the current era of ubiquitous internet access. In the United States, there was a stalled attempt by USWest to bring this service to two test markets, Minneapolis (around which I reside), and Omaha.

Other people in the area have documented the Exteltel to an extent, but I hadn't seen a teardown. I recorded some video and photographs, but not really enough to do a comprehensive post on tearing it down. My goal was to see if I could open it up and find a ROM to dump.

The bottom of the case had an assortment of screws, and to my surprise the top case comes apart in pieces. The modem board has its own cover that can be removed independently from the rest of the case. Once the modem case top is removed, the cover for the CRT can be removed with a little bit of angling. This was my first time discharging a CRT, but I had left it plugged in and powered off overnight. I assume there is a bleeder resistor, so when I finally shorted the anode there wasn't a pop. This is a monochrome CRT, so the wires that need to be disconnected are minimal. The CRT sits on top of a power board that was mostly easy to remove and set aside as one assembly, giving me access to the mainboard (finally).

The main board is covered by RF shielding, which is not surprising given how close the power board and CRT are. This RF shield is soldered to one of the potentiometer's ground, which is kind of a pain in the ass. I just bent it out of the way. 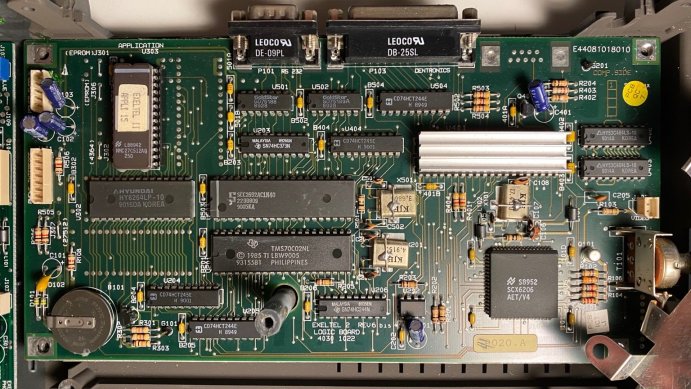 There's a clearly labeled 27C512 EPROM containing the system ROM. I had never worked with EPROMS or EEPROMS at this level, usually via some other interface for writing firmware, using an ISP header or otherwise. I purchased an EEPROM programmer (this Kee Electronics Willem model) that can handle an array of ROMs and memory. This is a topic for another post, but even if it costs a little money, get a modern one with USB. I went the parallel port route, and it was silly because I ended up needing a straight-through fully-populated DB25 cable, which put my cost for my programmer at about the same as I would have spent for a USB one.

Other people suggested I just use an Arduino or Raspberry Pi or something, but honestly even with the hassle of the cable, I didn't want to have to second guess this tool in addition to the work I was doing on the Exeltel. I needed to bust out an old Thinkpad T30 to get it done, but once I was set it up it was short work to actually dump the EPROM.

I'm still in the process of analyzing this ROM. This system uses a TMS7000 series CPU, the TMS70C02. I'm still working through the documentation, but the tools out there to disassemble and analyze this kind of software is limited, especially given my skillset (no skills whatsoever for this sort of thing). I settled on running the strings command on the ROM for now, while I search it more, using this TMS7000 Data Manual.

I've also ploaded the firmware to archive.org, along with a photograph of the mainboard.